What Exactly is Canadian Food?

You ask, “There’s Mexican food, Chinese food, and even Mongolian food but what’s Canadian food?” All I know about is Canadian bacon, and I kind of doubt that’s actually Canadian food.

So, let’s hear from Canadians: What’s on the menu up north? Ah, found a few clues on my own. Here’s 26 Canadian Foods You Need To Try on BuzzFeed.

We’re taking off for our annual trip to Maupin tomorrow. Here’s a photo from last year’s trip. I’m the wild woman hanging on for dear life in the top center. 😉 We’re just on the edge of a nice big hole that turns into a bunch of rapids.

The fellow in the bottom corner is my husband, looking calm as can be, and the one in the white hat is one of my gang from high school (30 years later). Notice the 9-year old is having a wonderful time. I’d have been screaming my head off if I were sitting where she is. LOL

I read, this post entitled Yes, Mr. Fireman that is my Ass! in CraigsList and just about fell over laughing.

Kristy’s blog, She Just Walks Around With it, is great, especially when you need a laugh or a smile.

I came across this supposedly classic candy selection from the 1950s, Chocolate Babies. I must have been living under a rock because I’ve never seen this particular item and I have spent more hours than I can count in the pursuit of all things candy.

Is this politically correct? Would you serve this to your friends and family? I found them at Hometown Favorites, Candy Store which is a great place for finding those “hard to find” items like Hershey’s Raspberry flavored baking chips. To save you steps, here’s a link to the page where I found chocolate babies.

While there, don’t miss the Hard to Find Grocer, which is what led me there in the first place.

How to Lace a Corset 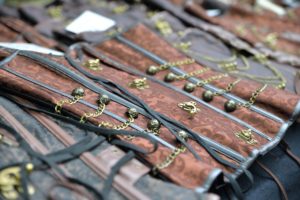 While looking for stretchy, see-through fabric to make Halloween costumes (anyone know where I can find some, let me know), I found this ultra-handy instruction page for how to lace a corset. Scroll down for the Corset section, and then go to Lacing a Corset.

You just never know when they may make a comeback and I’d rather be prepared.

Do not blame me if you follow links on that site. I am not familiar with anything outside of the page I mentioned above for those of you considering cinching yourself up anytime soon.

Self Control When You Least Expect It

Self Control When You Least Expect It

In the movie, A Fish Called Wanda, one of the characters had a phrase he’d use whenever things would go horribly wrong, like when his key to the safety deposit box with all the loot broke in the lock.

You’d expect him to start breaking things, shooting or cursing but this fellow would say in a long-drawn out fashion, “Dis-a-point-ment.” It was hilarious because it demonstrated another way of reacting beyond the rage we’re used to seeing.

Try it sometime. When you’re running late and everything is going wrong; every light is red, there’s a traffic jam, and you just broke the heel of your shoe, say out loud in your most serious voice, and say it like you mean it, “Dis-a-point-ment.” You may still feel angry and frustrated but wouldn’t that be better than screaming at the world and at yourself?